CommScope Holding Company, Inc. (NASDAQ: COMM – Get a rating) received a consensus recommendation of “Hold” from the thirteen research companies that cover the business, MarketBeat.com reports. Two research analysts rated the stock with a sell rating, five assigned a hold rating and three issued a buy rating on the company. The 12-month average target price among brokerages that have issued ratings on the stock over the past year is $10.00.

CommScope (NASDAQ: COMM – Get a rating) last reported results on Thursday, May 5. The communications equipment provider reported EPS of $0.20 for the quarter, beating analyst consensus estimates of $0.15 by $0.05. The company posted revenue of $2.23 billion in the quarter, versus a consensus estimate of $2.07 billion. CommScope had a negative return on equity of 235.45% and a negative net margin of 5.78%. The company’s revenue increased by 7.6% compared to the same quarter last year. In the same quarter a year earlier, the company posted earnings per share of $0.27. On average, equity research analysts expect CommScope to post 1.35 EPS for the current year. 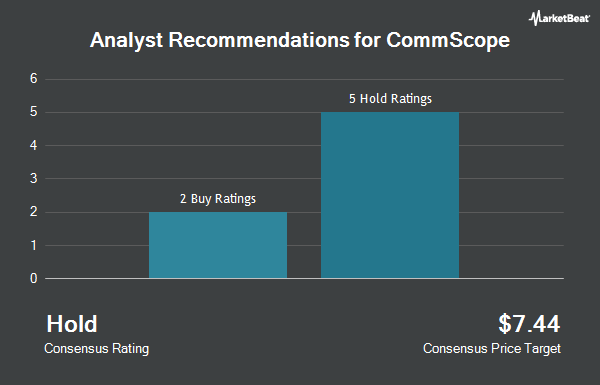